Only five days after the Jewish people were dramatically emancipated from the cruel Egyptian slavery, Pharaoh had a sudden change of heart and regretted sending the Jews away.  Intending to force them to return and to subjugate them to slavery once more, he gathered his men and chased after the nascent nation.  Having tasted a mere five days of freedom, the Jewish people found an Egyptian army bearing down upon them and almost overtaking them.

The Torah, in describing how the unified, single-minded, and focused army was bearing down upon and overtaking the Jews, seems to use erroneous grammar.  It states that “Egypt nasayah (journeyed, singular form) after them,” as opposed to, “the Egyptians nasa’u (journeyed, plural form) after them.”  Why this apparently mistaken verbiage?

Rashi, explains that the Egyptians had such extreme unity in their drive to re-enslave the Jews that it is as if they had “one heart and one body.”  The Torah, therefore, uses the singular form of the word.

We find a similar situation in next week’s parshah, when the Jews arrive at Mt. Sinai and prepare to receive the Torah.  Once more, a singular form is used to describe their encampment instead of the expected plural form.  Rashi comments that the Jews arrived at Mt. Sinai with such extreme unity that they had “one body and one heart.”

Rashi is teaching us an important lesson concerning Jewish unity.  The heart symbolizes the desire and will of a person.  A “single heart” indicates a single desire.  The Egyptians were unified only due to their common enemy – the Jewish people.  They shared a single desire to recapture the fugitives and their unity was solely predicated on that desire.  The Jewish people, on the other hand, felt united in a greater sense, above and beyond their shared desire to accept the Torah. 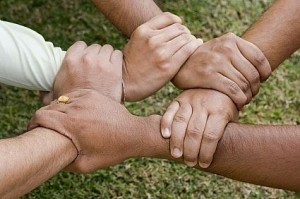 We Jews in the 21st century must also make efforts to be unified even when we do not share common goals.  Even when we may find ourselves on opposite ends of a disagreement, whether it be political, ideological, or practical, we must realize that we are still dealing with our fellow Jews.  We must make sure that our care and love for each other overrides all mitigating factors and that no disagreement can break it.  Hopefully, we will eventually develop unified desires as well, but our unified body – our sense of other Jews as a part of ourselves – must be first and foremost.