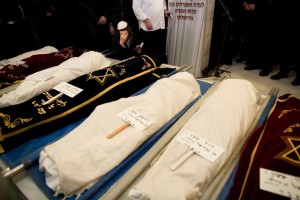 We have all heard of the tragedy this past week in Brooklyn, in which a fire broke out in the middle of the night, leaving seven children from the Sassoon family dead and their mother and the eighth child in critical condition.  It is beyond belief and the pain is tremendous.  Losing one child is a colossal tragedy in and of itself; losing seven in one shot?  Unimaginable.

I would like to offer another perspective based on the words of Gabriel Sassoon, the father of the family.  At the funeral in New York, the father of these children reportedly encouraged the participants that when they return home that day they should make sure to hug their children.

od forbid.  Well, much to our horror, seven of our children have been taken away from us.  We must follow the instructions of Mr. Sassoon.  We have to take a moment, a day, a month, a lifetime and appreciate the gift of children and of family that God has given us.  We must reprioritize our time and make sure that we are focusing on our family as much as we should be.  We must realize the blessings that we have received and we must thank God, not only with the Birchat HaGomel when surviving a dangerous situation, but every day, for not even putting us into that dangerous situation to begin with.